An Adjustment of Status for T-Nonimmigrant Story

An Adjustment of Status for T-Nonimmigrant Story

Our client “Ramon” was identified as a victim of human trafficking, and our office helped him to file for T Nonimmigrant Status (also known as T-visa). As a victim of human trafficking, he could also apply for his wife and daughter, who were out of the country at the time. His application was filed with him as the principal, and his wife’s and daughter’s applications were filed as derivatives.

After USCIS granted their T-Nonimmigrant status, our office worked with the International Office for Migration to help Ramon’s wife and daughter to come to the U.S. The IOM helped Ramon’s relatives to get their passports. They also helped them with the DS-160 applications, so that they could get an interview at the U.S. Consulate and have their T-visas stamped on their passports. The IOM also took care of the airfare to bring them to the U.S. Finally, after having being separated for 5 years, Ramon was able to reunite with his wife and daughter. But our work did not end up there.

U.S. immigration law allows T Nonimmigrants principals to apply for legal permanent residence (“green card”) under certain conditions. One: they have to have a continuous period of 3 years since their T-visa was approved. There is also the possibility to request a certifying letter from the Department of Justice. Two: they have to be a person of good moral character since their T-visa approval. Three: they have complied with any reasonable request for assistance in the investigation or prosecution of the acts of trafficking. Alternatively, they would suffer extreme hardship involving severe harm upon removal form the United States. Four: their visa has to be currently valid and the applicant has to be admissible to the United States.

It is extremely important that T-visa holders seeking to adjust status look for an attorney with expertise on filing this kind of applications, since they are very different from family based applications. If the principal has been arrested, their applications becomes even more challenging. Most adjustment of status applicants may only be granted lawful permanent resident (LPR) status in the discretion of USCIS. That is, even if the applicant meets all of the other statutory and regulatory requirements, USCIS only approves the application if the applicant demonstrates that he or she warrants a favorable exercise of discretion.[1] 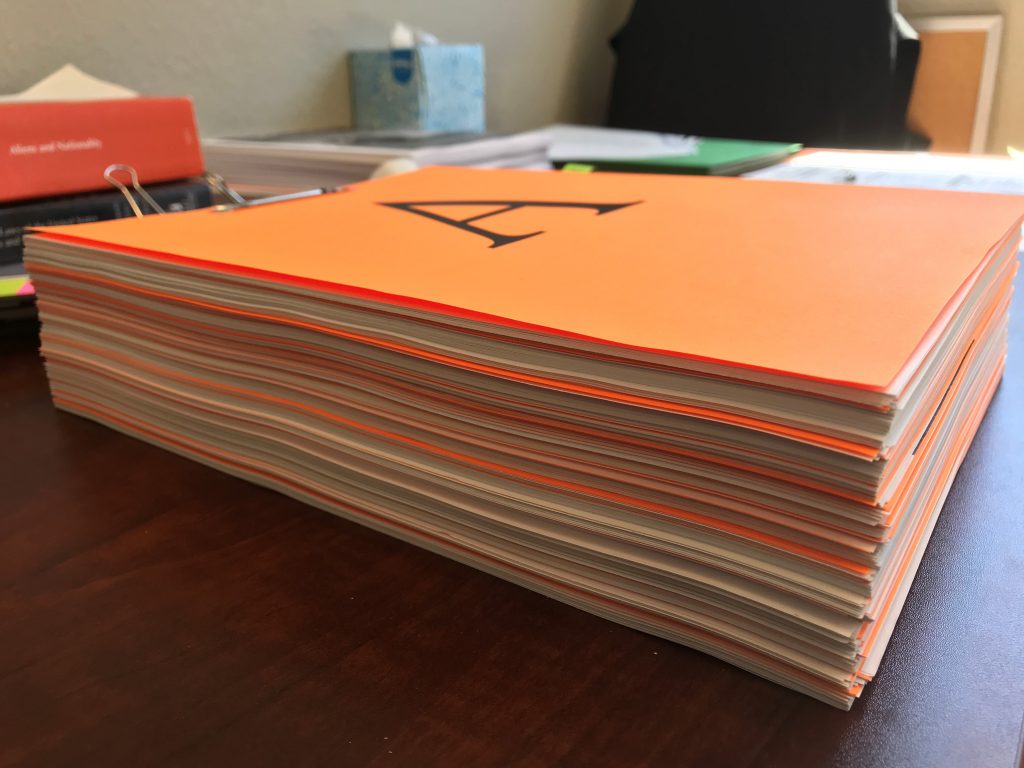 Our office recently filed an application to adjust status to Legal Permanent Residence for a principal and four derivatives. Since the principal had two criminal charges (one of which involved an arrest related to his vulnerability after escaping forced labor) Jacquelyn Bradford, our Human Trafficking Justice Project Senior Supervising Attorney, had to do extensive research. Fortunately, we have a very knowledgeable attorney who has being doing Pro Bono work for us for several years, and he helped us with the research. His name is Martin Himmelfarb, and we are very lucky to have him in our team. Our attorney added proof of good moral character for this client in addition to evidence that the client was in the United States for each month of the last 3 years, and, at the end, his application (along with his relatives) was 559 pages long. So big indeed that, in order to mail it to USCIS, we had to place it in a box.

This blog was produced by Gulfcoast Legal Services, Inc. under Project Number 2018-VT-BX-0005, awarded by the Office for Victims of Crime, Office of Justice Programs, U.S. Department of Justice.  The opinions, findings, and conclusions or recommendations expressed in this press release are those of the contributors and do not necessarily represent the official position or policies of the U.S. Department of Justice.